Gabrielle Corradino stared out at the vast body of water stretching before her. Aboard the NOAA research vessel Ronald H. Brown, Corradino along with 23 other crew members were venturing into the Gulf of Mexico for 35 consecutive days as part of the Gulf of Mexico Ecosystems and Carbon Cruise (GOMECC-3).

To better understand how ocean chemistry along all U.S. coasts is changing due to ocean acidification, and identify where marine organisms may be at greatest risk.

“By the end of this cruise, my colleague Mrun and I will have filtered over 236,000ml of seawater onto over 500 filters to help answer questions on microbial species diversity using both molecular and pigment profiling,” Corradino said. “While invisible to the naked eye, each of the filters will have tens of thousands of tiny organisms (phytoplankton and protozoa) retained on their surface that represents the base of the food web within the Gulf of Mexico. We believe the data we are collecting will serve as an important baseline as we study the impact of ocean acidification on the Gulf of Mexico,” she said.

According to Corradino, ocean acidification is sometimes referred to as “climate change’s evil twin”.

“With the addition of carbon dioxide (CO2) from the atmosphere into the ocean, the pH of the ocean is lowered causing it to become more acidic. This is particularly harmful because it decreases an organism’s ability to build their skeletons and shells,”Corradino said. “Many zooplankton are being impacted by this rapid change in ocean chemistry. Some species of pteropods, corals, mussels, oysters and sea urchins are all being affected by the change in pH at the planktonic stage through adulthood,” she said.

Gabrielle Corradino is a National Geographic Explorer and ecologist passionate about marine science, organism behavior and education. Inspired early on by a marine science internship at Bermuda Institute of Ocean Sciences, Gabrielle had the opportunity to work on the Fish Barcode of Life Initiative with resident scientist Dr. James Wood. Gabrielle quickly discovered that marine science was her calling.  Currently embarking on a PhD in Biological Oceanography at North Carolina State University, Gabrielle is a Department of the Interior Climate Science Fellow. Through ongoing research, she hopes to elucidate answers on the role nanoflagellates play in the plankton food web.

“Did you know that plankton is not a single species or genera? Plankton actually refers to any organism that cannot swim against the current. That means that jellyfish, scalps, copepods, diatoms and bacteria in the ocean are plankton! These organisms provide the base of the freshwater and marine systems,” Corradino said. 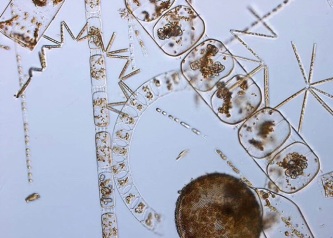 “Plankton act as photosynthesizers (phytoplankton) and primary consumers (zooplankton). I study some of the most abundant predators in the ocean called nanoflagellates. Depending on the species, these organisms can consume bacteria, parasitize phytoplankton and, or photosynthesize. Who wouldn’t want to study such an amazing group of plankton? Hopefully the ecologic and taxonomic research that I am contributing to the field will help to elucidate the “black-box” that is the plankton food-web,” she said.

One of the highlights of Corradino’s career has been successfully sequencing the nanoflagellate she has been working with for the past four years of her thesis.

“That was very exciting because this was my first molecular project and my wonderful advisor really helped me all the way through sequencing (isolating a specific section of DNA),” Corradino said. “Another career highlight was finding out that my grant was selected from National Geographic. I got the email while I was on a research cruise in the middle of the Gulf of Mexico.”

In summarizing her thoughts on how the next generation of ocean conservationists will leave their mark, Corradino believes the future holds the key to ocean acidification.

“We are the generation of technology. Think about everything that has come out in the last five to seven years! It is amazing to think about how science has changed since I graduated college and I am excited to see what the generations behind me accomplish,” Corradino said. “In a changing climate, I think that the next group of scientists will figure out how to successfully mitigate ocean temperature rise and ocean acidification. There already are some great ideas out there and I cannot wait to see which ideas are implemented.”