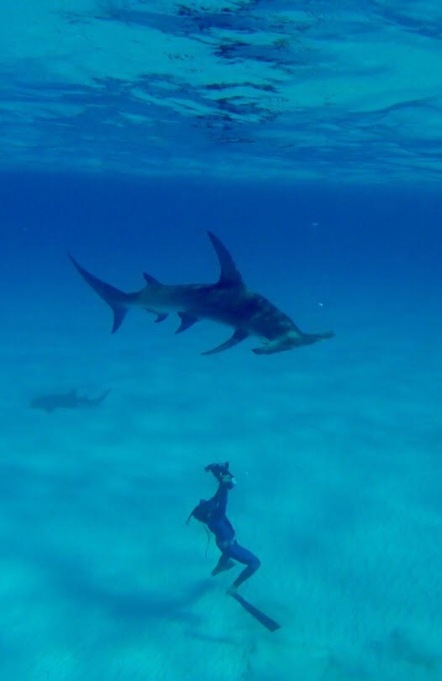 Originally found in both tropical and temperate oceans, a globally distributed species like the great hammerhead should be relatively easy to spot. This is no longer the case. The great hammerhead (Sphyrna mokarran) is listed as endangered by the International Union for Conservation of Nature and Natural Resources (IUCN). A highly migratory species, no conservation management plan for this species currently exists. It is essential to improve data collection of this species. Due to its vulnerability to depletion, low survival at capture and high value for the fin trade, this species is globally  endangered, with evidence for declines greater than 50% according to the IUCN’s assessment of the great hammerhead.

For shark enthusiasts and scientists, the IUCN’s verdict made it seem as if there would never be a consistent place to swim with these iconic animals.

With the gulf stream on its doorstep, Dr. Samuel Gruber understood the potential for a shark research laboratory on Bimini. The warm water attracts an abundance of wildlife, with pelagic species thriving in its nutrient rich waters. As the stream slopes north between the Bahamas and Florida, depths can reach 790 meters (2600 feet). Water depth drastically deepens as the stream follows the continental slope beyond the edge of the continental shelf, bringing up nutrients for many pelagic species to feed on.

While it was well known that great hammerheads could be seen around the banks off Bimini, to further protect the local population researchers at the Shark Lab had to determine whether the hammers they were seeing were seasonal residents or aimless wanderers. Another key question was where did the great hammerheads go after they disappeared from Bimini in late spring each year?

The preliminary results of the tagging project showed that there are individuals who return to Bimini annually. In 2012, with enough data to back up their initial findings, the Shark Lab partnered with the Save Our Seas Foundation to establish a more sophisticated tagging program.

Dr. Tristan Guttridge, lab director and senior scientist at the Bimini Shark Lab, is leading the charge in 2017 with his great hammerhead research published in Frontiers in Marine Science. Guttridge’s paper discusses the extent of movements and connectivity of great hammerheads between the U.S. and Bahamas. A landmark study, the tracking results revealed that the great hammerheads make large scale migrations, with some covering up to 3030km round trip! Found as far north as Virginia, this study provides incredibly important information for fisheries management. Protected in Bahamian waters, the great hammerhead becomes vulnerable once it leaves and is subject to different fishing regulations when it enters federal waters.

The acoustic receivers around Bimini are part of an array of receivers that were put in place to study the different species found in the North Atlantic Ocean. By accessing this larger network of receivers, researchers at the Shark Lab are beginning to determine the parameters of the great hammerhead’s range. After several years of generating data, researchers are starting to see a pattern where great hammerheads travel to Bimini during the winter, and migrate up the east coast almost 782km (485mi) in the spring and summer. Gaia, a seasonal hammer resident to Bimini, has followed the same migratory pattern for the past five years, returning back to Bimini each winter.

“During winter we are seeing that the hammers are more contracted in their range, and in the summer they widen their patterns,” said Guttridge. “If we find data that suggests they come to Bimini specifically to pup in the winter this could have serious implications for how we choose to manage them in the future,” he said.

With only 11 acoustic tags surgically implanted in the Bimini hammers, the Shark Lab relies primarily on photo identification of individuals. With photo archives going back five years, researchers are able to identify individuals through unique notches in the dorsal fin, pigmentation or shading anywhere on the body, and any significant markings. Through this method the Shark Lab has been able to identify three female hammers that have returned to Bimini five years in a row.