With one skiff patrolling the mangroves, and the other cruising parallel to us on the sand flats, we are perfectly positioned to spot a southern stingray. Jamie and I are standing on the bow of the boat, scanning the surrounding water. Kate guides the skiff directly alongside the mangroves. In addition to collecting data on the shark species of Bimini, the Shark Lab also tracks the movements of southern stingrays (Dasyatis americana). Although this species is abundant in coastal systems throughout the Caribbean, very little is known about their movement ecology.

At half past 12, the sun is high and there is no wind. The water in the lagoon is glassy and calm, ideal for spotting the flat, diamond-shaped discs that bury themselves beneath the protection of the sprawling red mangroves. Routinely leaving the safety of the mangroves on a low tide to hunt on the sand flats, we usually spot the rays on a rising tide. Rather than chasing the stingrays around the lagoon, we ideally search for rays that we can corner by the mangroves. With wing-like pectoral fins, southern stingrays can easily out maneuver a skiff over a low tide.

Just off our bow, I can see a large patch of raised sand beneath the mangroves. As the skiff edges closer, a whip-like tail is exposed above the sand. Two small spiracles are also visible. Pointing towards the particular section the ray is under, Kate understands and puts the boat’s motor into neutral as we try to glide quietly past. Signaling the other boat to come in so we can build a perimeter around the ray, Jamie has her net pointed towards the ray’s last position.

“Once we are in position, we can all get in the water at the same time. Only move in towards the ray once we have a tight circle formed so she can’t escape,” said Jamie.

Dip nets in hand, Jamie and I sit on the bow as Kate guides the skiff towards the ray. Gary, Tyler and Harry are in position, waiting for the go-ahead to enter the waist-deep water. Stingray captures usually involve eight Shark Lab volunteers. With two people on the bow of the boat acting as spotters, and another standing in the skiff ready to hand the two spotters on the bow their dip nets. The last person on the boat is the driver. Arguably the most difficult job to do while capturing stingrays, the driver must coordinate with everyone on the boat, watch what the ray is doing and anticipate its movements, as well as communicating a plan of capture with the other boat.

“Is she still there?” asks Kate as we move closer. “Yeah, I see her tail sticking out just there.”

Cutting the engine about two meters from the ray, we all look to Kate for the go ahead to enter the water. “Jamie, Kara, move more to the left to close out that section,” Kate said. Tyler, Gary and Harry move in from the right to tighten up the circle in the center. Trying not to kick up too much silt, we close in on the ray. We are perfectly in position to capture this ray. By the time it begins to shed its sandy camouflage, it is cornered by six dip nets. Attempting to flee through any opening, I raise my net up around it, just before it darts between us. As its pectoral fins begin to flap against the net, Gary quickly puts his net beneath mine to secure the ray. A large female, she is even bigger than I originally estimated. Female southern stingrays can grow to a disc width of 150 cm, contrary to the smaller male stingrays that reach maximum size at 67 cm. 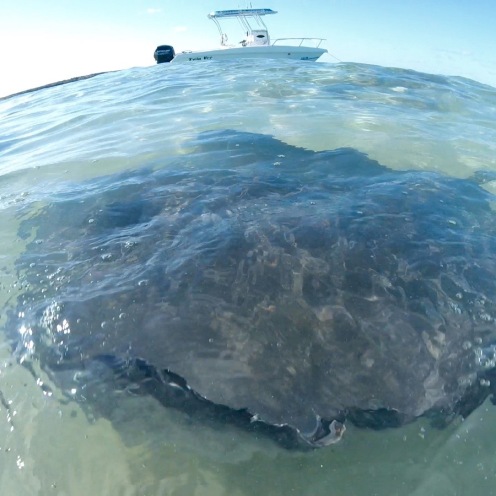 Kate is already filling up the large transport tub we have on board with fresh sea water. Moving her towards the boat we keep her spiracles submerged in water so she can breathe easily. Pulling myself on board I prepare myself for the hand off. Jamie moves into position holding the other side of the dip net. On the count of three, the four of us lift the two nets out of the water and into the transport tub. Sliding the exterior net off, we retrieve a protective welding glove to prevent the stingray’s barb from whipping back and forth as we take off the interior net. “Do you have her barb?” Kate asks Gary. Slowly moving the net out from underneath her, and away from her barb, we successfully remove the net without her getting tangled.

Removing a pit tag reader from the dry box, we set to the task of collecting data on this massive southern stingray.

“She’s a new cap,” Jamie says. We write the GPS location, and time of capture into the data book as soon as we get the ray in the transport tub. When we feel confident that the animal is not under too much stress we begin to take samples and measurements. The data the Shark Lab collects on stingrays is the species, sex, individual PIT tag number, animal’s disc width, disc length, spiracle width, barb length, if the ray has been captured before, if blood, stable isotopes, and muscle were taken, and if an acoustic tag has been inserted. Any distinctive features are also written under the lab comments section.

With Gary keeping the barb covered at all times, Jamie lays the measuring tape across the stingray’s pectoral fins to determine her disc width. “She’s a big girl, her disc width is 100.5 cm,” Jamie said. Moving the tape to the tip of her nose, Jamie runs the tape over her dorsal ridge down to the lower lobs of the pectoral fin to measure her disc length. “I have 89.3cm for disc length.” The next measurement is the distance between her spiracles. Just below the eyes, the spiracles are external respiratory openings that allow the stingray to take in water while submerged in the seabed or buried in sand. Water enters through the spiracles and leaves through the gill openings, which is separate from the mouth on the underside.  “Spiracle width is 16.0cm.” The final barb measurement is taken with a ruler. “I have 9.6 cm for barb length,” she said. With the measurements out of the way we can take muscle and DNA samples. Using surgical scissors, I cut a small triangle—no bigger than my pinky nail—from her right pelvic fin. Cutting the triangle in half, I place one half of the triangle in a vial of DMSO solution and the other in a small plastic bag. Within both the DNA and stable isotope bags there is a slip of waterproof paper that contains the animal’s PIT tag number, species, sex, date, and disc width written down.

With measurements and samples taken, Gary and Tyler head back to their boat to keep patrolling for buried rays. I remove some water from her tub to make room for a fresh supply. Kate directs the skiff back towards the lab. “She seems pretty calm, but we should move her into the pen as soon as possible,” Kate said. Jamie and I both nod our heads in agreement. As a new capture, it is procedure to bring her back to the natural enclosure located just off the lab’s back beach. The rays remain in the underwater pen for 1-2 days. Which gives researchers enough time to take individual blood and muscle samples.

Guiding the skiff around the raised sea grass beds and sand flats scattered through the lagoon, Kate parks the boat next to the pen. Removing the tuna clips from the pen-mesh I pull down the door of the pen to make way for the meter-wide stingray. We watch her do a lap around the pen and bury herself in the sand before we head back to the mangroves to search for more stingrays.